This week  we traveled about 120 miles over 3 days and 25 hours!  We left Florence on Tuesday morning and backtracked up The Tennessee River then onto the Tenn Tom for about 61 miles in total to an anchorage near Armory State Park.  The next morning we were just before a lock and we learned there was tow traffic and significant fog, so we didn’t start our travel day until 10:45 – that’s really late for us. It made for some cool photos and time for a dinghy ride to a nearby state park for a walk. That late start and the barge traffic caused us to travel only 17 miles in 5 hours.  Thursday was our longest day, 10 hours to go 61 miles and we arrived at the marina in Columbus, Mississippi the birthplace of playwright Tennessee Williams just before dark. 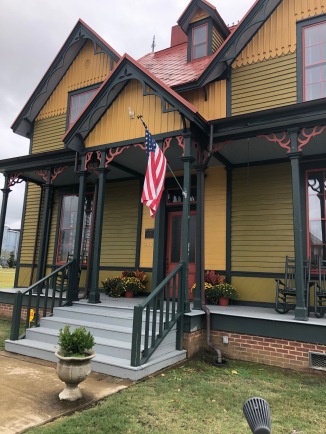 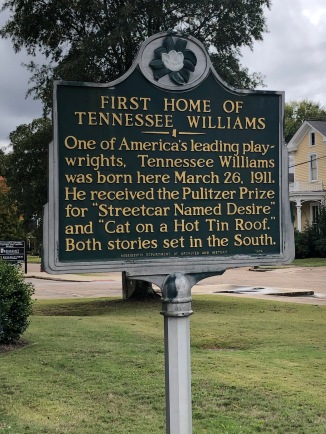 The days on the Tenn Tom were long because of barge traffic in the locks; commercial tows always take priority over pleasure craft and we were behind one for a while on our last travel day. It’s kind of a fun story about that barge actually- so the barge consists of a very big tow boat and they are pushing barges of various sizes – this one was probably 3 wide and 5 or 6 long, so he was BIG! They don’t move very fast but they take up a lot of room so passing them has to be arranged over the vhf prior to doing so. The radio call sounds something like:

Us “Yes sir, we are approaching and would like to pass”

Sounds straight forward right? Well it is as long as you and the tow operator can understand each other; you’re both speaking English but we are back in the Deep South! I have to admit that I look at Danny and say “what’d he say?” most of the time and he understands him. Ironically, he often doesn’t understand me  and says “What?!?” about 50% of the time. Hmmmmm……And the 2 thing tells the approaching boat which side to take – took me a while to fully understand that, but I do now. 😉 Somehow we ended up the lead boat for a while on Thursday and I had to call the tow to ask permission for 13 of us to pass – I guess I did ok but I said pleasure vehicles instead of vessels.  The tow operator was polite enough not to correct me and not only let us pass but actually pulled way over near the riverbank, all the while acknowledging each boats “thank you” over the radio and wishing us safe travels. He even said he wishes he was with us! The crew was out on the sides waving and taking pictures of us. Impressive that they enjoyed us instead of seeing us as a nuisance!

The weather early in the week was beautiful for anchoring while waiting to enter a lock or overnight. The mornings have been chilly – but warmed up nicely into the 70s and Danny and I have been toasty warm up on the fly bridge. We’ve had lots of company day and night as lots of Loopers are bunching up again on the part of the trip. Our old buddy boat Lucky Me caught up again it’s been nice to spend time with Susan and Greg – we’ve also been traveling with new friends from EcstaSea and Southern Cross (more about these boats soon) so our little group of 3 boats has grown to 6 these days! It’s been fun to catch up with a few boats that we met way back on the East Coast in the Spring and  have met quite a few new people in the locks and at docktails.

A little bit of detail about this kind of travel – When you enter a lock it’s important to call ahead to the lockmaster to request permission and also to get a sense of whether there are tows that will cause a long wait. Our “commodore” Greg from TxAu calls the lock at 6am and then we all hop on the vhf radios at 6:15 am to get an idea of the best time to head to the lock. It’s worked out really well, it’s better to wait at the marina or anchorage than at the lock. So our routine has worked well – but on the 3rd morning of our trip 7 more boats caught up along the way so that we were 13 when we entered the lock . That’s not so many, but the interesting thing was that the “new” group also had a “leader”, so there was a lot of talk on the radio while the Captains figured out who would call the lock, who would raft with who, etc. Ultimately everyone played nice and it worked out really well.  The Looper Spirit at its finest!

So about our two new buddy boats – The crew of EcstaSea aren’t a couple. The Captain wanted to do the Loop but his wife didn’t, so he hires people to crew for him. Right now there’s a woman aboard for 3 months, she’s from Canada and will fly home when we get to Tampa. The other boat, Southern Cross is a 61 foot Ocean Alexander that we’ve seen and admired in many ports since as far back is Florida. It’s a gorgeous yacht and we were invited on for docktails the other night and I got a huge case of boat envy. It’s the most beautiful boat I’ve been in and the couple aboard are really nice people. That Captain was a real Captain in the Navy, so his leadership skills have come in handy – specifically on that testosterone filled vhf call I mentioned!

So we arrived here in Columbus on Thursday and it started raining before dawn on Friday. The rain was predicted and it rained really, really hard for more than 24 hours, so we were glad we planned on staying for three nights. Most of us didn’t venture off of our boats until dinner at a local restaurant. This marinas has a loaner vehicle which happens to be a minivan- since there were 13 for dinner that meant two trips to get everyone there and two trips back.  Kinda funny riding along in a minivan with a bunch of other adults. 😂

We’d planned on leaving today and continuing on our trek to The Gulf but now we’re hearing that the river is at flood stage and will crest near here probably later today. That means a swift current and likely lots of debris floating around, some of which you can’t see.  It could be a bit risky and sounds an awful lot like traveling in The Big Muddy Mississippi to me. There was a big docktail gathering last night and much “should we stay or should we go” discussion; our group has decided to stay another night and re-evaluate early tomorrow morning.  So I’m doing laundry and updating the blog while Danny is finding things to fix, he even helped someone on another boat that we didn’t know – now we do. That’s what it’s about. 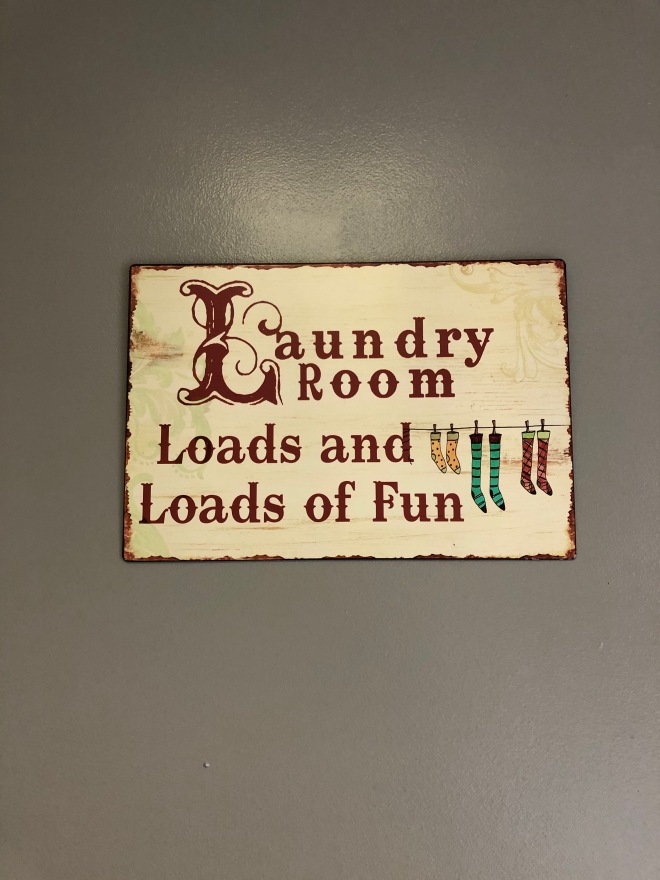 Hopefully we’ll get moving together if the creek don’t rise (yep I said it and I meant it). We have been blessed with great weather for most of this trip, so we can’t complain but we are getting closer and closer to Florida, so we want to move. Those palm trees and umbrella drinks are a callin’!

Thanks for following along on our Great Loop journey. Until next time,

One thought on “Weather woes and big slow tows”