We haven’t traveled by boat much since my last update, but we’ve done some exploring by car and have truly enjoyed the journey. Most of this story can be told in photos but first a bit about where we are, why, and how we got here.

As I mentioned previously, our boat insurance is not valid south of Demopolis, AL until November 1st when hurricane season is officially over – how hurricanes know to read a calendar is beyond me 🤣. That means  we’ve had some time to kill, so we strayed a bit from the Great Loop “route” and instead of banging a right onto The Tennessee Tombigbee Wayerway (affectionately know as the Tenn Tom), we continued down the Tennessee River to Florence, AL to kill some time.  When we left Paris Landing we stayed at anchorage for one night, then traveled to Pebble Isle which is on The Kentucky Lake.

After leaving Pebble Isle on a foggy morning, we anchored on Pickwick Lake near the state park for two nights. I’m  definitely getting more comfortable with anchoring overnight, but on our second night at Pickwick the winds picked up and there was a rainstorm which meant we swung around a bit – we held fine, but I admit to having some red, red wine to calm my nerves before bedtime that night.

We walked in two beautiful state parks during our trip, the first at Pebble Isle – we learned about how the Kentucky Lake was made by filling in towns and displacing hundreds of families back in the 40’s in order to enable commerce (barges!) on the rivers. We also walked on grounds where the civil war was fought which was pretty cool. In Pickwick State Park we walked in a Loop along the water – seems to be a theme with us. 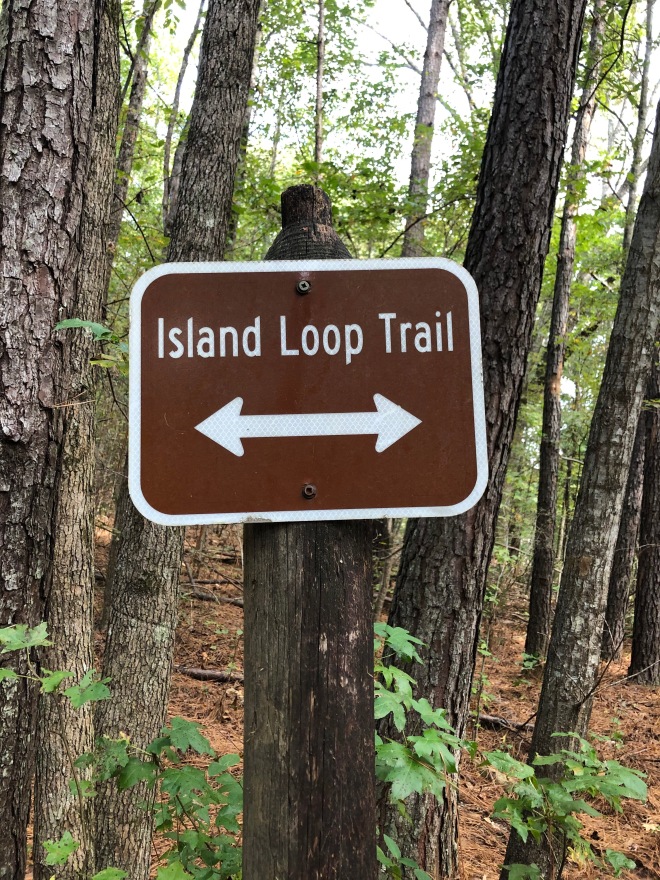 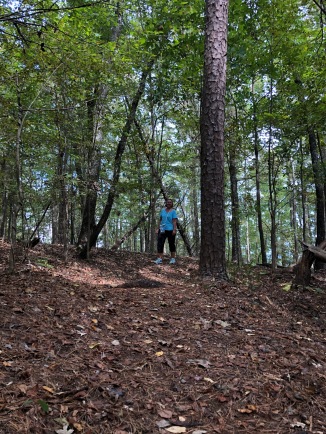 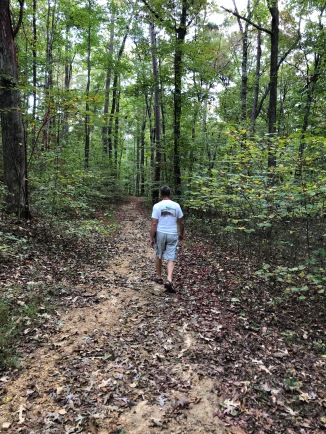 When we arrived in Florence we rented a car – actually a pick up truck which made Danny happy – so we could take some road trips. First stop Memphis , TN which was about a 3 hour trip. I’d been there before always on weekends, so I was surprised that it was relatively quiet on a Wednesday afternoon, there were just a handful of retired old folks like us. I have to admit that we were in bed by 9:30, I’ll bet it got a little more lively after that!  We listened to some blues and walked around the city and stayed at The Peabody Hotel which just exudes southern elegance and is the home of a twice daily duck walk – their resident ducks walk to the fountain where they live. I thought Danny got a picture and he thought I did – so no pictures! But there was a painting of one in our room!

On the way back to the boat we stopped at Shiloh, where a major and deadly civil war battle was fought in 1862. The grounds have been restored and maintained as a national park with monuments, cannons and plaques placed strategically where various battles were fought over two days leaving 23,000 Union and Confederate soldiers dead. It was somber and I reflected on another “battlefield “ we honored on this trip just about a year ago – the 9/11 Museum. Obviously the only common factor in these two sites are the lives lost and the fact that wars and death are a part of our national history which I’ve been re-learning on this trip.

Later in the week we visited a National Cemetery in Tennessee to further remember and honor our Veterans. The cemetery was reminiscent of the one we visited in Normandy, France a few years ago.

Now on to a lighter note! Our trip to Chattanooga,TN which was also about 3 hours from the marina and took us through Alabama, into Georgia for a bit, then Tennessee and into the eastern time zone.  It kind of tickled me to see a highway sign that said “entering eastern time zone”, I’ve flown into different zones and even boated into them, but haven’t driven into them – it’s the little things folks!! Anyway, the drive was so scenic, the mountains, the river, the lakes all made for a beautiful trip. We drove up a winding hill to Lookout Mountain where there’s a tourist attraction called Ruby Falls. You take an elevator down about 300 feet, walk through caves and get to a beautiful underground waterfall – we enjoyed it even though the tour guide told corny jokes and the caves and waterfall were artificially lit!

After the tour we walked around part of downtown  and then stayed at The Chattanooga Choo Choo Hotel! The original train station is now the check in area and although there’s an option to sleep in a train car, we spent the night in a regular room – the train car was a little too claustrophobic for me! 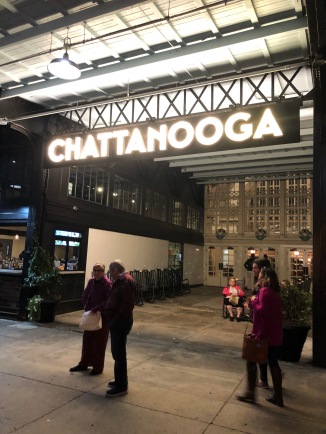 The next day we went to Rock City – also a tourist attraction but self guided and way less cheesy (except for the part where there are caves filled with gnomes – actually a little creepy). Basically you walk through caves (think Lost River in the White Mountains only bigger) then up to an observation deck where earlier generations claim you can see 7 states on a  clear day. I have to admit I’ve had to pull up a map a time or two on this trip – the geography here confuses me. The views were breathtaking. 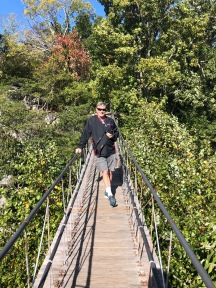 He wanted to go a lot faster than I did

Wishing he hadn’t eaten that biscuit! 😂

On the way back we took a detour (ok – it was unintentional, I put the wrong place in the GPS) and toured the George Dickel Distillery. It’s the less famous Tennessee Whiskey distillery tour and Danny had mentioned he’d like to see it since he’s had a sip or two over the years 😉.  We were almost lost but we made the best of it! 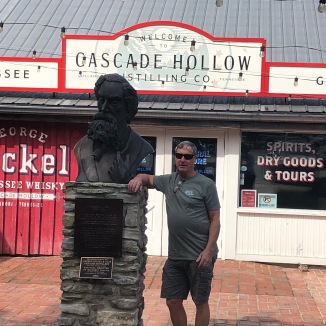 The detour took us 50 miles out of our way but the drive back was all back roads and we stopped for lunch in a little town called Wartrace,TN.  This part of the country is just gorgeous- we saw cattle farms, cotton farms, quaint downtowns, little ramshackle houses and stunning ranches along the way. I loved this little vacation from my vacation.

So on Tuesday we will head back to the Tenn Tom and continue our trek south. The goal is to stay ahead of the cold and behind the hurricanes.  We will keep you posted and hope you enjoy traveling along with us!