This morning we are in a town called Kagawong which is in Manitoulin Island on the North Channel in Ontario.  Ontario is really a big province and we’ve seen a lot of it since getting here a little over a month ago. It’s truly hard to describe the beauty of these waterways; these pictures probably do a way better job than I can.  We’ve traveled for the last nine days, but we’re staying here today.  It’s a beautiful, peaceful morning …….  but it sure hasn’t been that way all week! 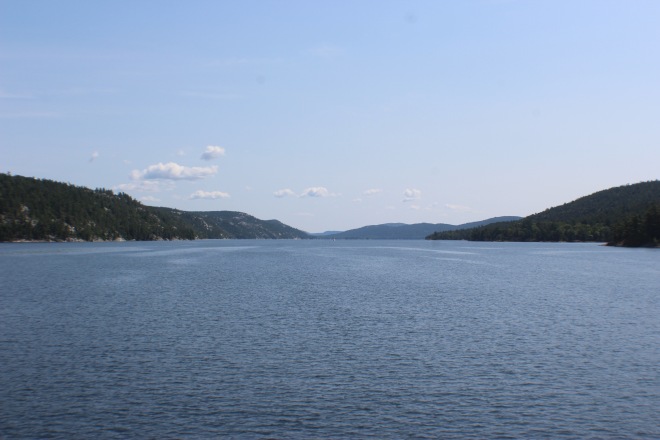 When we left Parry Sound last weekend we traveled through the Georgian Bay, tucking into anchorages along the way.  The first stop was Regatta Bay where we rafted up with the fleet and took our dinghies to another “famous” fish place called Gillies.  It wasn’t as good as Henry’s (in my opinion) but we had a good time, as always.  The night before we got there, we’d challenged each other to write a new looper toast – since we “docktail” every night we’d gotten a bit bored with the existing one which an old Irish blessing that goes like this:

There are good ships and wood ships and ships that sail the sea; But the best ships are friendships and may they always be

So, back to Gillies…..We decided to make a contest of the new toasts, and invited a Gold Looper couple anchored nearby (when you finish your loop, you go gold) to judge.  All of the entries were great and our reactions and voting may or may not have gotten a bit loud.  OK, we were loud.  So, we were “shushed” by the owner; she literally told us to “be quiet”……wow.  Our toast tied with TxAu’s toast – ours is #1 below, Nancy’s is #3. YOU be the judge now but remember this is MY blog 🙂

Monday turned out to be one of the more challenging days we’ve had lately.  We launched Regatta Bay at 8am in cloudy skies and knew there was some weather expected later in the day.  We traveled through some very narrow channels surrounded by rocks all around.  At one point near “Hangdog Reef” I made Danny go on the wrong side of the channel to avoid hitting a giant boulder that looked way too close for comfort for our wide boat, I’d watched TxAu narrowly clear it in front of us and they’re about 4 feet more narrow than we are. We made it through safely, but both agreed we shouldn’t have gone on the wrong side of that green buoy, and to be honest I don’t think we should have been in that channel at all.  I looked back at my notes from the briefing we had about the bay after the fact – which is no good – and we were actually told we should avoid that channel and that area.  We were lucky.  We all got to the bay safely and rafted together as usual, with anchor lines on the bow and ropes securing us to trees on the rocks in the rear to avoid “swinging”.

Later that evening as we were finishing up our pot luck of pulled pork and Mac n’ cheese however, our luck changed.  Near as I remember, here’s what happened – the wind started gusting, and our boats started moving.  Quickly.  Together. Toward the rocks!  As it started pouring with thunder and lightning, everyone scrambled to their boats and the madness ensued.  We needed to start the engines and get the hell off of those rocks – TxAu came closest to hitting them, in fact if their dinghy hadn’t become a huge fender, I think they may have!  We needed to untie from each other, pull the anchors and untie the ropes on the back – Tex and Danny actually ended up cutting them with knives that were quickly passed to them by Nancy & Laurie. Then we realized that TxAu’s anchor line was crossed with ours.  Kevin and I were on the bow of our boat struggling to free them with long boat poles – we ended up losing the poles overboard before Kevin yelled to the captains (Danny and Tex) to maneuver enough to get them untangled.  Then we slowly moved forward.  Lucky Me was the first to get to safety – they were actually closest to the rocks so we were relived they were ok.  Laurie Jean stayed tied up to us until we got into a more open area because they were also close on the other side!  As soon as we were safe we radioed one another to make sure there was no damage and that everyone was ok.  This whole ordeal only lasted about 10 minutes according to Danny, but if felt a whole lot longer!  Since there were a couple of hours of daylight left (thank God it’s light out until 9pm here), we found a marina a mile or so away and tied up safely for the night.  Some of us had another drink on our boat that night – happy to be all together again and all safe.  The next morning we went back to the scene of the crime and recovered what was left of the lines we cut and one of our two lost poles.  I wrote another “ode” about the ordeal to share with the fleet.  This is the last one in this blog, I promise!

It was dinner time on Done Diggin’ with the whole crew; TxAu, Laurie Jean, Lucky Me and Diggin’ too

We were rafted all up side by side, when Texas yelled – Hey! Did our anchors slide?

The rocks on our stern were suddenly near, we spring into action filled with fear

Engines were started, lines were set free; What’s happening now?  Your line is with me?

Adrenaline, strength and a little bit of luck; We’re untied – we can move now – Holy F*!@

We moved on slowly to find a place for the night, Our bond a bit stronger our friendships still tight 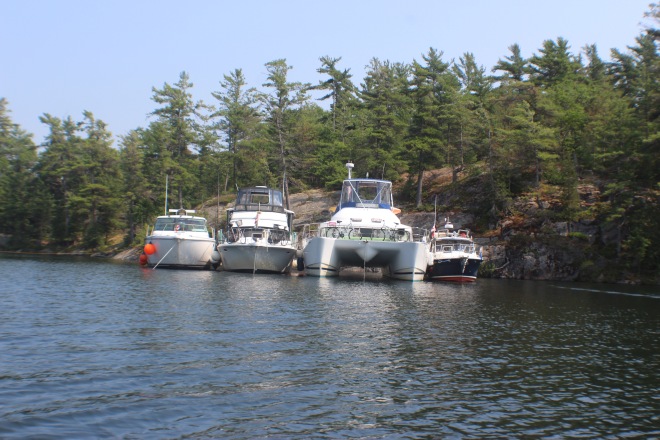 The terror behind us, we moved on to another beautiful anchorage in Bustards Bay.  It was a little bouncy on the bay that day and windy at the anchorage, but we held firm!  The anchorages just keep getting prettier, we put our kayak in and paddled around looking for bears – they say they’re all over the place here but we haven’t seen any yet.  From Bustards Bay we moved on to the town of Killarney which is the end of the Georgian Bay and beginning of The North Channel.  We were a bit disappointed with the marina there, so stayed only one night instead of the two we’d planned.  We did catch up with some other loopers for docktails, which was nice.

On Thursday we traveled from Killarney to Baie Fine to the prettiest anchorage yet.  Our guidebook says that Baie Fine is the closest thing to a fjord we’ll ever cruise in; it is in fact the most unique place we’ve ever boated in! Again, hard to describe the beauty of our anchorage in “The Pool” at Baie Fine.  We took our dinghies across the bay to climb about a mile and a half up the mountain to Lake Topaz for a swim.  The hike was good for my body and for my soul – I’d been feeling a bit “off” for a couple of days, maybe because of how difficult a day we’d had, probably because I’m missing home and my family again.

Yesterday we cruised from Baie Fine to Little Current for a quick provisioning stop and then here to Kagawong.  Later today we plan on a little bit of sightseeing – there’s a waterfall you can hike called “Bridal Veil Falls” and an old Anglican Church that’s adorned with boat parts!  There will no doubt also be planning and docktailing later today; all in all a great end to an eventful week!

I hope your weekend is great – thanks as always for following along on our adventure,