It is 52 degrees, windy and rainy as I write this on Mother’s Day morning.  I’ve had face time with Ryan and Amanda and Lilah, and with Shannon and Reina, and a phone call with Evan (he hates face time the little goober and he confessed he doesn’t read my blog so I’ll get away with calling him that), so I know the weather is similar at home, but I still wish I was there with them all today.  I’ll be home soon for a much needed visit, but enough of the poor me stuff!  Despite the miserable weather and missing my family, it’s still a remarkable trip and we’re lucky to be doing this.  I decided this week to put my big girl pants on and be brave.  No, this isn’t a reference to weight I’ve gained, I think I covered that already in the hush puppies blog!

We are in Chesapeake City, MD in the C&D Canal, which connects the Chesapeake and Delaware Bays. We traveled through The Chesapeake for the last week with stops in Urbanna, VA, Tangier Island, VA, Solomons, MD, Annapolis, MD  and now here to Chesapeake City.

The conditions on the Chesapeake were different every day; it ranged from “dead calm” to “bouncy” to “lumpy” to downright “ROUGH” which it was for a while yesterday.  Please note these are not official nautical terms 😉.  Before we leave port each  morning we check on the weather, waves and wind on a few different apps so we knew it would probably be choppy when we got out in the bay yesterday. None of the apps predicted the 4’ waves that we were taking on the bow (front) of the boat about every 4 to 5 seconds.  To add to the drama, I’d gotten a text from a boater we’d met at the last marina telling us how bad it was getting and that if we were close to shore we should consider turning back!!  Ahhhh!!!  To be honest I started to panic, my hands were shaking and I was starting to google nearby marinas so we could consider bailing.  But then something happened –  I literally talked myself down!  I’ve learned a few things that I kept telling myself:   #1 – I trust my Captain.  Danny could handle those seas easily, in fact he enjoys it when it’s like that.  #2 – The boat can handle it, actually the boat can handle much more than I can.  And #3 – I could handle it!  We’ve been in conditions like this before and although it was uncomfortable it was temporary, and it was fine.  So, we hung in there and after about an hour or so the seas calmed down, I started talking in coherent sentences again, and all was well.  This is not to say I didn’t cross myself compulsively and I do literally thank God for a safe voyage every time we arrive at our destination.  God has been good to us and although I don’t consider myself religious, the beauty of the shore, the places we’ve been and the people we’ve met makes me more and more grateful all the time and reminds me that I am faithful.

The towns we visited along the Chesapeake were as different as the sea conditions.  Urbanna was remote and quiet, there are just a few shops and restaurants and an IGA for shopping!  We walked there to “provision” (boat talk!) one morning, and as we checked out the cashier asked if we’d like a ride back to our marina.  Mind you, we hadn’t told her we were in a marina!  When I asked how she knew, she said she saw us walking, Danny had a backpack….in reality she probably recognizes everyone who shops there and we were new!  It started to rain just as we were leaving, so we took the ride.  Such hospitality and kindness- this has not been uncommon on this trip at all!

Tangier Island is probably the most unique stop so far.  This island in-between Virginia and Maryland is only 3 miles long with a population of 400.  There is a small school, a hospital which a doctor travels to once a week, a post office, a couple of restaurants and that’s it.  The only work is fishing and crabbing.  People travel around the island in golf carts and everyone knows each other.  We had a great fish dinner at one of the restaurants at the “intersection” in town, and were amazed at the activity and the community, and especially the number of kids just running around and playing!  It’s like a town time forgot.  We stayed at the one dock in town, Parks Marina, where 88 year old Mr. Parks helped us tie up and told us some stories.  I’d have liked to hear more, but the mosquitoes were biting, so we rushed back to the boat.  The island is actually being taken back by the sea, so it won’t be there forever.  We walked on the beach, it was a beautiful day – I’m really glad we stopped there. 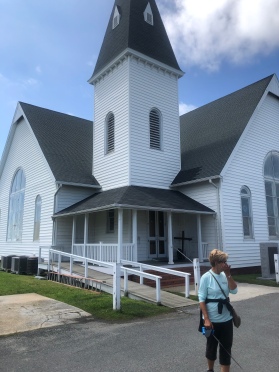 We spent 3 nights in Annapolis this week, this has been another highlight of the trip for me.  Annapolis is rich in history, patriotism and beauty.  We walked a lot to explore the city and took a tour of The Naval Academy, guided by a 70+ year old retired Naval aviator who was commissioned there many years ago.  We were docked right in the heart of the city in an area called “Ego Alley”, where boats cruise up and down just to see and be seen.  It was a fun stop. 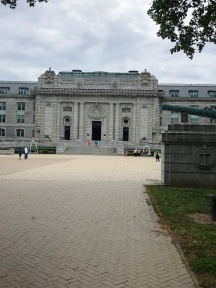 Bancroft Hall at Annapolis where all the midshipmen live

The chapel at The Naval Academy

Walking along the beautiful historic homes

This week I’ve had text time with people as usual, but also phone time with my sister Brenda, my good friends Doreen and Robyn, my brothers Rick and Jack and my sister-in-law Linda.  It’s always so good to hear the voices of the people I love. So, now we wait out another cold front which creates this wind and rain that makes travel unwise.  The next hurdle is The Delaware Bay to Cape May, NJ, we’ll take all this on as soon as weather allows, and I will continue to be brave and wear my Big Girl Pants like I did yesterday!

Happy Mother’s Day to my family and friends.  Love and hugs,

3 thoughts on “Time to put my big girl pants on and be brave!”