Today is Saturday, May 4th and we’re in Urbanna, Virginia.  We left Southport, NC on April 21st and traveled north through North Carolina, stopping in Surf City, Beaufort, Oriental, Aurora, Belhaven, Columbia (Alligator River), Elizabeth City and Coinjock.  Yesterday we arrived in Hampton, VA and today here to Urbanna.  I keep a journal of each day’s launch and departure so we can track mileage and keep track of where we are.   There have been more sunrises and sunsets, beautiful days on the water and some days where it’s a little less comfy – more on that later!

We have foldable bikes which makes exploring easier

Arriving in Beaufort NC was beautiful – we’d been in neighboring Morehead City in the fall and it was great, but we were happy to stay in Beaufort this time for 3 nights; it’s a cute port town with some good restaurants and shops.  We took a dinghy ride to a beach on a barrier island and walked to the end where we surprised and delighted to see wild horses!  I’ve heard there are places where this is not unusual, but had never seen it before. 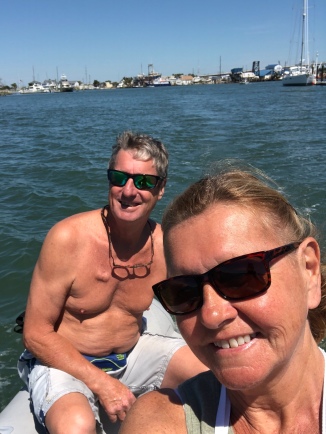 Beaufort was a great stop, but also where we said goodbye to our friends Kris and Rick on Eagle One.  They were just days away from finishing their Loop and were on a bit more of an aggressive schedule than us so they moved ahead.  We were really sorry to see them go, but also grateful that we got to meet them and spend so much time with them.  We had a delicious dinner on our last night together and we talked about how different meeting people and making friends is on a trip like this.  We’re meeting people we would never meet in any other space or time, who are on a journey that most people really don’t understand.  You become “kindred spirits” pretty quickly.  The night we left Beaufort we ended up having dinner with a couple we met on the dock that morning.  It’s funny really – how many times have you had a 15 minute conversation with someone and invited them for dinner that night?  Something about this shared experience lowers inhibitions and allows you to be more open.  I’m really enjoying this aspect of the trip and look forward to meeting more people along the way.  Danny is too.  He’ll tell you I’m the icebreaker and the chatty one, but he’s holding his own!

So, I realize that when I blog I highlight all the great places we’ve been and the fun things we’ve done.  But on this trip, as in any part of life, there are days and moments that aren’t perfect.  We’ve had to travel through some pretty big bodies of water to get here and when the wind blows more that 10 knots it can really make for a “lumpy” ride.  I swear I hate it less than I used to, but I still get nervous when it’s rough.  One morning we were in a big river with winds and waves building and still had a long way to go, I wasn’t having fun.  I remembered that a Gold Looper (someone who’s completed the Loop) had offered their dock at their home on a Creek in Aurora, NC, which is between Oriental where we left and Belhaven where we were going and sent her a FB message.  She answered within minutes with directions to their dock; she and her husband met us there, helped us tie up and couldn’t have been friendlier or more helpful.  And it was free!  It was a beautiful spot and I was happy they joined us for a docktail in the evening.  Danny was disappointed that we had to “bail”, but we were both so thankful for the kindness of strangers.  It was such a pretty spot, and we rode our bikes to a shrimp dock to get fresh shrimp off the boats that day.  It was delicious. That bad day turned out pretty good in retrospect!

There have been a few times that I didn’t want to leave a dock when we did, and some times we stayed when Danny wanted to leave.  And then there’s pulling into a port; although we are WAY better at this than we were in the beginning, it’s nerve wracking. Most of the time docking goes very smoothly, but it’s not unusual for us to be swearing under our breath at each other while doing so. We have to remember that those new headsets we bought so we can communicate without yelling while docking, pick up even a whisper.  So if you get sworn at -and we do – you have to get over it – and we do. Danny always thinks everything is going to work out fine, and I always think we’re about 10 seconds away from a big killer wave!!  It’s about finding balance – we’re working on it.

So, yesterday we left the ICW.  We were reflecting on how excited we were when we got to the ICW last fall and on how much we’ve learned and experienced since then.  We’ve been gone for 7 months and have traveled almost 3,000 miles!  And we still have a year to go and thousands more miles before we complete the Loop.  I get pretty sad when I think too much about being away that long and will instead focus on the day, planning for the next day and my next trip home!  We’re planning a two week vacation from our vacation at the end of May and it honestly can’t come fast enough!

Thanks for following along with our adventure.  We have room for you if you want to come aboard to share some of it with us.

One thought on “Reflections from our Floating Home”