Hello from Charleston where we were at the intersection of King and Queen yesterday afternoon!  This is a beautiful city and we’re looking forward to Thanksgiving dinner at High Cotton, a restaurant downtown where Danny had “the best shrimp and grits in the world” when we visited last year.  It wouldn’t surprise me a bit if he ordered it today.  He’s such a traditionalist! 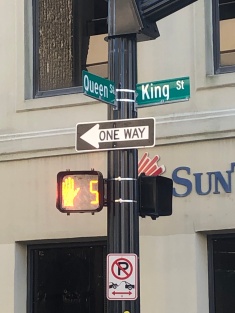 After a few days of a rest here, we’ll continue to head south.  We estimate we’re at least 3 weeks behind schedule, but one of the many things we’ve learned on this trip so far is that the best Boat Plan is No Plan, there are just too many variables. We’ve traveled about 1100 miles so far, through 10 states (including the one we’re in) and have cruised the Atlantic Ocean, Delaware Bay, Chesapeake Bay, Cape Fear River and about a dozen canals and rivers including the Alligator River!  We come into a marina every night and have really enjoyed some of the towns, especially Belhaven and Beaufort in NC and Southport and Georgetown in SC. There have been beautiful sunrises and sunsets, cold mornings, sunny afternoons, too much rain and even a tornado!  Although we did see 70 degrees a couple of times a few weeks ago, it’s been relatively cool, todays high will be 60.  We’ll take it – but keep cruising South “until the butter melts”! 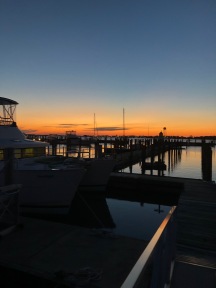 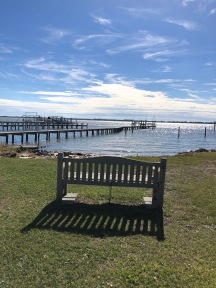 We took a short trip home from November 8th through the 12th so we could celebrate Lilah’s third birthday.  She loved every minute of her troll party and I loved  seeing her and smooching that adorable face.  We spent time with our friends Robyn and Terry, Brenda and I went to see “A Star is Born” (sob!) had a fun lunch out with Ryan, Amanda and Lilah,  and we watched a movie and had Chinese food with Shannon and Evan.  I loved spending time with everyone and miss you all again!

Our cruising schedule has been a little more consistent since we left NY a few weeks ago, though we were held up a few days in Beaufort, NC for weather.  We met some other cruisers at a “docktail” party one of the boats hosted and have learned so much from the experience of the people along the way.  There are many resources for first-timers like us in addition to the other boaters.  We typically look at 4 weather apps daily; Danny charts our trips on two different devices, and we use good old fashioned paper charts while we’re under way as well. We’ve been in the ICW (Intracoastal Waterway) since Virginia and parts of this journey are challenging for even the most seasoned sailors and cruisers.  We went through an area called “The Rock Pile” in NC the other day, and a particularly shallow area in McLellanville, SC where we actually bumped bottom it was so low.  Luckily Danny was able to back out and keep moving but two other boats weren’t as lucky and were stuck until the tide changed or a tow boat service came. 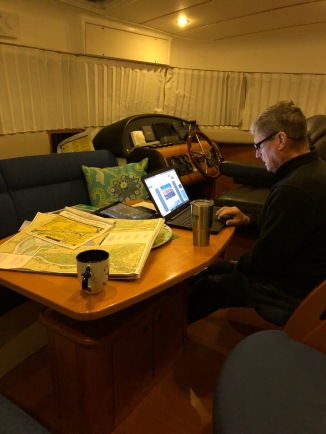 So, the adventure continues and we are thankful for this experience. Thanks for following along with us!

One thought on “Happy Thanksgiving from Charleston, SC”